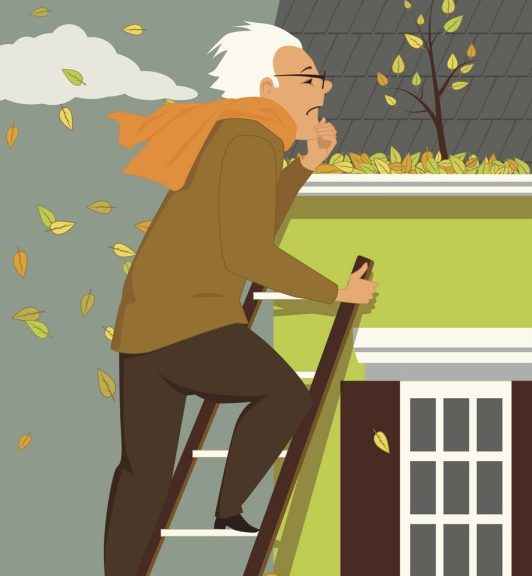 We’ve already had a taste of the autumn weather to come. There’s no chance of getting through this autumn and winter without at least a few storms, which means that it’s vital to be ready for them.

No, I’m not talking about battening down the hatches and stocking up on supplies — though, if you really want to do that, don’t let me stop you. No, I mean getting your guttering and downpipes ready for the rough weather to come.

Falling autumn leaves get blown around in the wind, and other debris gets blown with them., and some of this debris can end up in your gutters and downpipes. If it’s left, the rainwater can’t run away and could end up flooding your home, perhaps causing structural damage.

But that’s OK — you can make an insurance claim for any damage caused. Can’t you?

Perhaps not. If the insurer’s loss adjuster finds out neglect of your guttering has contributed to the damage, you could well find yourself having to foot the entire repair bill yourself.

Give Your Guttering Some TLC

Before the winter storms set in seriously, it’s vital to get your guttering and downpipes looked at and cleared out. In the case of the guttering, this can be quite straightforward, but you’ll need to rod all your downpipes to make sure they’re not blocked. At the same time, you need to check that nothing’s damaged in the guttering system, since this too could cause flooding of your property.

Getting all this done will be good for your home, but if you end up needing to make an insurance claim anyway (because of a particularly destructive storm, for instance) you’ll also need evidence to give the loss adjuster to prove it’s been done. If you hire a contractor, make sure you get fully itemised receipts. If you’re going to do it yourself, get someone to take photos or video footage of you at work.